My Life With Chickens

My Life With Chickens

When I bought the farm in 2018, the sale came with four Rhode Island Red hens. They were all older girls and I had no idea as to how my life with chickens was about to unfold. While we had chickens our our Virginia farm when I was a girl, I did not know the true nature of these animals. Once I owned the four hens, I proceeded with detachment and refused to name them. Little did I know how these farm animals would eventually capture my heart, and how my life with chickens would propel me into powerful lessons of loss and love.

I had a large, well-built chicken coop with a small screened chicken run, situated within an expansive fenced and gated area. One day I decided to open the coop door and let them come out to roam. I was surprised they did not come rushing out, but rather they gathered at the door chirping and peering out. I figured they would venture out in due time and went to my office. Shortly thereafter, I looked out the office window to see all four hens toddling out the front gate. I rushed out, herded them back into the yard and was stunned to see how fast they could run while flapping their wings. They ran all around the yard, stopping to curiously explore all the spaces around the house, and finally settled into the shade beneath the big mango tree for the afternoon. At dinnertime I attempted to herd them back through the gate, but they ran up and down the fence until they all squeezed one by one through an opening in the fence by which they had escaped. From that day on, the hens were eager to come out, run and explore. Chickens are immensely curious, yet cautious, animals and benefit from the freedom of their previous undomesticated life to roam and run. While egg production diminished a bit, they seemed happier and healthier with their new free range lifestyle.

I spent time online in chicken forums, reading and researching, and determined that I had much to learn. I did not realize all the many predators that chickens have, from raccoons and snakes to coyotes and foxes and from hawks and eagles. With my focus on these predators, I overlooked a smaller one that wreaked havoc in my chicken coop: rats. It was April and I began to notice rat droppings in the coop, so decided to set a bait box. By this time, I had rebuilt the fence and secured a more manageable chicken yard. The first bait box went outside the yard and the next morning it was completely gone. Some creature must have dragged it away and I could find no signs of it. So I set another, then another, but the rat droppings kept increasing.

I finally realized that I had a real problem. One evening as I was sitting on the back patio, I heard the metal feeder clanging in the coop. I knew the hens were roosting and a frightening sensation came over me. I reluctantly went down to the coop with a flashlight. It was a horror show with more rats than I could count running everywhere. I froze but saw all the places the rats scurried towards to escape. I had a rat infestation under the coop.

I called Wildlife Services in the morning, having hardly slept, thinking about my poor hens being surrounded by an army of rats. They came right out, we determined only part of the coop had been trenched and they set four traps. We had to wait a week before we trenched and secured the coop so we could reduce the rat population, and not trap them all alive under the coop. Wildlife Services came out every day to re-bait, every time all the bait was gone and I removed numerous dead rats from the coop every morning. It was awful! On the day the trenching was scheduled, I went down to the coop early to find the Alpha hen dead, the rest of the hens traumatized and all the eggs broken. I could only surmise that the Alpha hen had come down off the roost to perhaps protect the eggs, and had been attacked or overwhelmed by so many rats. I called my neighbor, Roy, who came right over, and relieved me of the dead hen. He told me that my older hens were going to start dying of something, and that I had to deal with my dying hens as I would likely lose the rest over the next year. I was so not happy with this news, but some relief came when the coop was secured and at last, rat free.

The Death of Hens

The rat free coop came with a renewed vigor for both the hens and myself. I caved in and named them. Mama was the new Alpha followed by Sweetie and Greenie. A few months later, Sweetie began limping and in a matter of days, she was paralyzed. I frantically researched her condition, built her a nice bed where she could sit during the day and added a crate in which she could sleep at night. I treated her with homeopathic remedies, and every few hours brought her water and food. I resolved she was on her way out, and all I could do was make her comfortable. I spoke with the vet, who kindly did some of her own research, and later confirmed my resolve. I prayed she would die soon peacefully, but she kept hanging on. I finally took her to the vet and put her to sleep. I could no longer watch her deterioration and her sad eyes. I buried Sweetie in the native plant bed beneath a sweet, fragrant shrub.

It was time for two new younger hens. My chicken man delivered two young Rhode Island Reds, and one was quite feisty and the other very calm. I named the former, Rocket, due to the explosive way she ran across the yard and named the latter, Rose. Rocket and I did not get off to a good start as on day one, she flew out of the chicken yard three times. When I came down to the coop at evening to feed, she was out of the yard again. She was in the woods behind the coop, pacing up and down the fence. With the other hens in the coop, I opened the gate, grabbed a broom and walked to where she was hoping I could steer her along the fence and around to the open gate. She did not like the broom and lurched at me a few times. So I sat in the chicken yard as the sun was setting, talked to her as it grew dark until she finally flew back into the yard.

Only a few weeks after the new girls arrived, poor Rose was picked off by a hawk from the chicken yard. I came down to the coop at dinnertime to find a pile of feathers in the yard with no sign of the other hens. I found Mama and Greenie huddled in a corner of the coop while Rocket was hiding in some tall grass. They were all traumatized, especially Rocket, who had lost her buddy. This trauma was later followed by the death of Mama. She withdrew from the other hens, and started spending her time sitting with closed eyes in a corner of the chicken run. It wasn’t long before she departed. I buried her under a Sapote tree in the food forest.

It was time again for two new hens. My chicken man brought me a Buff Orpington, Blondie, and an Americana, Bossie. Greenie was now the last of the original four hens and I knew her days were numbered. But before Blondie and Bossie arrived, Greenie took Rocket under her wing and they became great pals. Blondie was so sweet and the first hen I had that liked to be touched. Bossie was distant and did her own thing. Only a few weeks later, Bossie stopped eating with the other hens at dinner and was already roosting. I grew concerned, made her special batches of oatmeal and goat yogurt that she devoured and determined from my research that she might have parasites. I ordered her some meds, but before they even arrived, I found her dead in the corner of the coop. She was such a beautiful hen whose blue/green eggs I never got to see. I blamed myself for not having realized sooner that she had arrived as a sick hen, and cried my way through burying her in the food forest.

I was left with Greenie, Rocket and Blondie. Greenie came alive hanging out with the younger girls, but it was short-lived. My heart sank when I saw her limping one day as she was my favorite of the original four. I called her Greenie because I made batches of fresh garden greens for the hens often, and Greenie so loved them. The crate came back into the coop for her to sleep in, and it wasn’t long before she stayed in it all day. The evening before she died, she came out of the crate at dinner to gobble up her food and drank a lot of water. I found her the next morning leaning against a food bucket and she had died standing up, which was a sign that she had a very peaceful departure. Rocket and Blondie were still on the roost making an unusual high pitched sound. I knew they were grieving the loss of Greenie. I buried this wonderful hen in the food forest under a Jaboticaba tree. When I was digging the hole, Rocket flew out of the chicken yard, which she had not done since day one, and came running over. She was making that grieving sound and stood there as I buried her good pal.

It has been ten months now with just Rocket and Blondie, who are now best friends. A large, new chicken run was recently built and they seem to love their expansive new home. I am contemplating two new hens now that I have a spacious, protected and secure chicken run. For now, however, my life with chickens is simple and sweet. 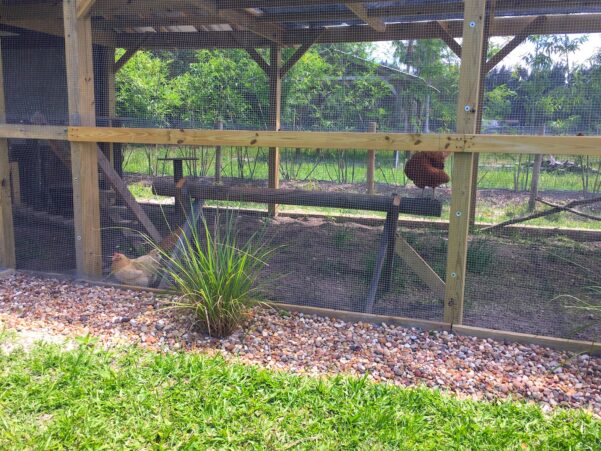 Rocket and Blondie in the new chicken run